The Best Birthday Present Ever!

Earlier this month it was my birthday and Mirko, being the dutiful lover that he is, surprised me with a special present.  I grabbed it with both hands and had a ball.  💋 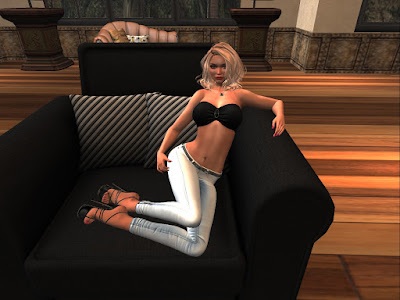 I sat there waiting.  Mirko promised me a surprise for my birthday but wouldn't tell me what it was.  He kept checking the time and I assumed he had forgotten my birthday altogether and was waiting for a last minute package to arrive from Amazon. 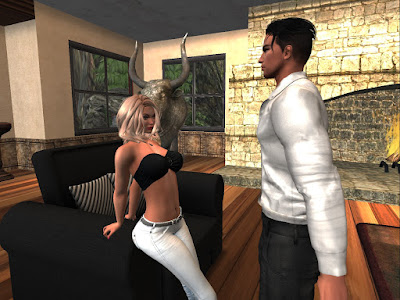 I'm not known for my patience - I didn't care about getting a present from him but there were better things I could be doing with my time. 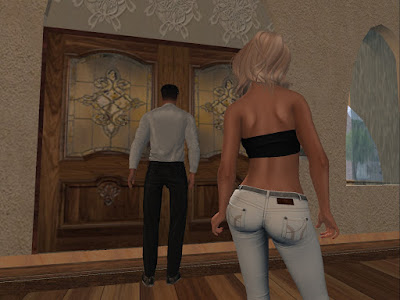 FINALLY, the doorbell rang.  Mirko quickly ran over to answer it and I followed. 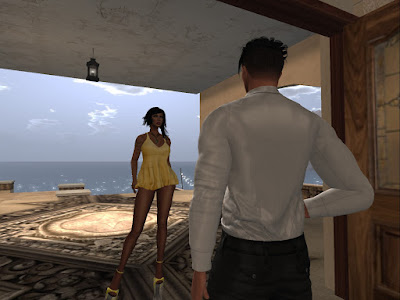 'Wow...the postal service has really gotten lax with it's dress code...'  This was the first thing I thought when Mirko opened the door to a gorgeous woman in a VERY short dress. 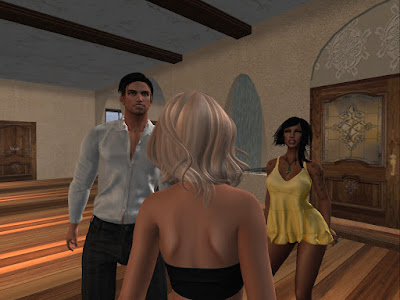 As my brain began to comprehend what was happening, my body reacted...I was instantly damp. 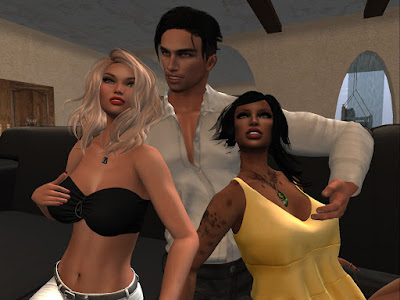 We sat on the couch and chatted for awhile, mostly about how he had gotten away with his little surprise.  We've played with a lot of other people before but this was the first time either one of us had surprised the other.  Good idea, Mirko! 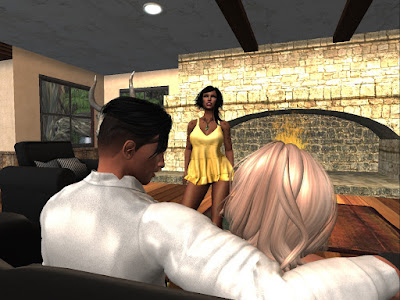 After a bit, the girl, whose name was April, stood up abruptly and said, "Time to get this birthday started!"

She reached down and grabbed her skirt and in one quick motion lifted it over her head... 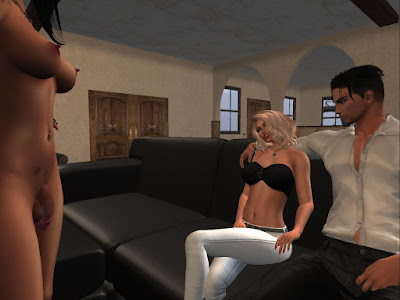 ...and gave me another surprise!  This girl was packing a little bit extra! 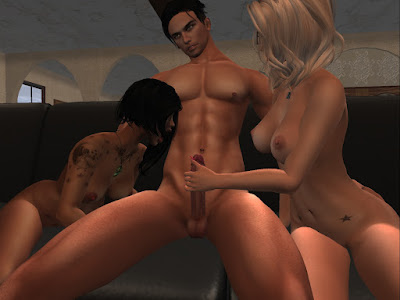 My mouth started watering and in a flash, all of us were naked.  April and I sat on either side of Mirko and I started slowly jerking him off while April leaned over and took him in her mouth. 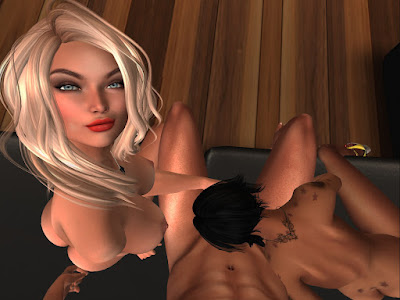 April licked and sucked his stiffening rod as I lazily jerked him into her mouth.  His moans told me he was enjoying himself...but I wanted to put him to the test! 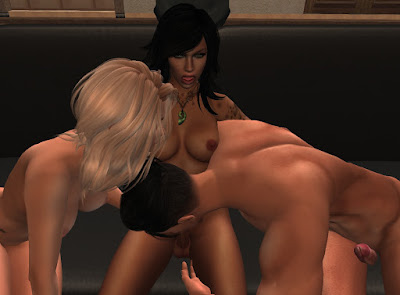 We all shuffled around and in a moment I was stroking April's dick right into Mirko's mouth!  He tentatively licked it at first but was soon sucking like a pro.  His cock, which was still quite hard, told me he was enjoying himself...but it was my birthday, dammit - it was MY turn. 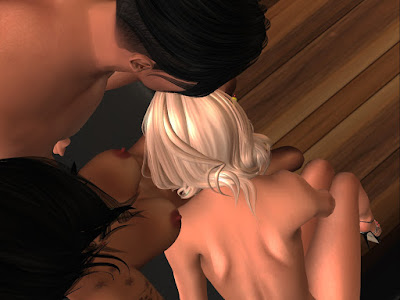 So yeah...I sucked April's dick right there in front of Mirko.  I sucked it hard too, while my fingers caressed her balls. 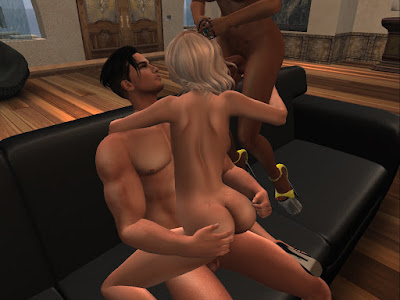 I soon found myself impaled on Mirko's fat cock while April stuffed hers into my mouth.  I loved how naughty it felt and I came hard all over Mirko's shaft.... 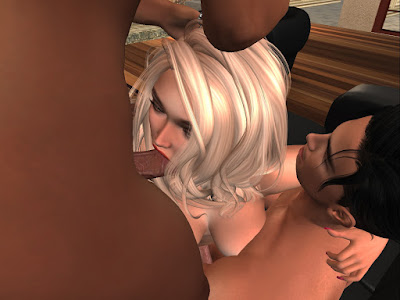 ...but I never stopped sucking April!

I opened up wide for her as she thrust her member in and out.  Fuck yeah! 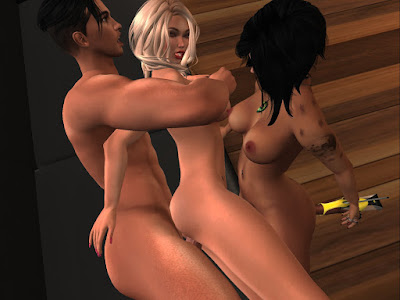 It wasn't long before I felt Mirko slide into my ass while April entered my pussy.  He held me tight as they ganged up on me, filling both of my holes with deep and savage thrusts.
OH MY GOD it felt so fucking awesome...I didn't want it to stop! 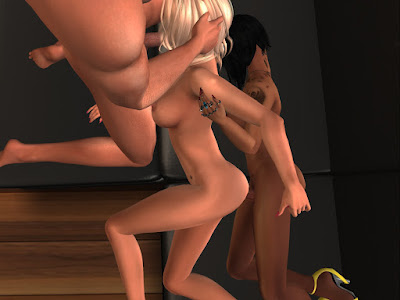 But April wanted my ass and I gave it to her with a whimper as she filled the gaping hole Mirko left when he pulled out.  Not to be sidelined, he rammed his cock right into my mouth and guided my head down to help me take it all in.  No easy feat, I assure you! 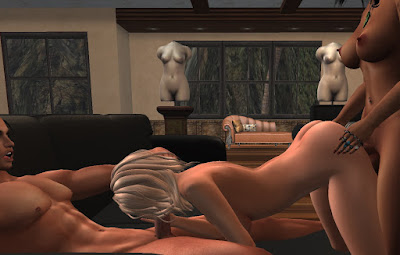 We opted for a more traditional position so April could go deeper into me.  Mirko's moans once again told me he was enjoying himself...but so was I which April soon found out as I creamed all over her tool. 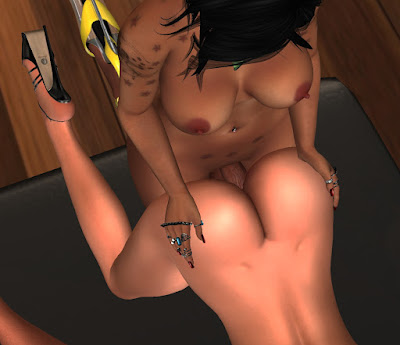 But god love her, she didn't quit...she kept fucking me hard and deep, her body slamming into my ass cheeks with every thrust.  My pussy contracted wildly on her dick as I came...I could feel how hard she was! 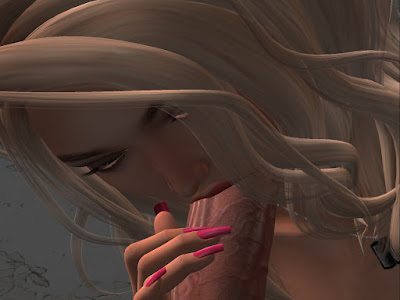 And I could also feel how hard Mirko was cause his cock was still in my mouth.  I sucked him good as a way of thanking him for arranging this surprise! 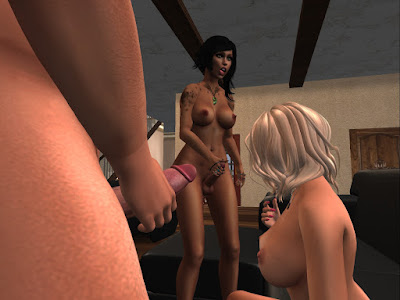 And suddenly, as if they'd been planning it, they both stood up and helped me down to my knees.  They both started stroking their cocks and before I knew it...splash! 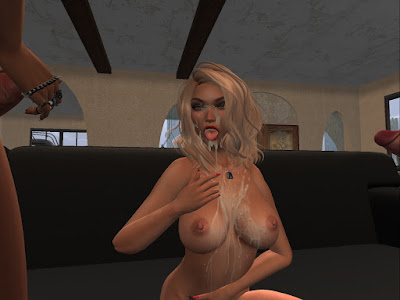 Holy shit they both came a lot...I reveled in their spunkage!  Mirko's empty balls told me that he had enjoyed himself...and the truth was, so had I. 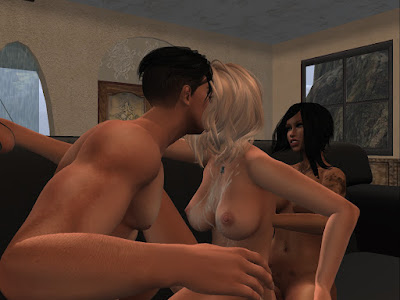 
Posted by Isabelle Cheviot at 1:00 AM