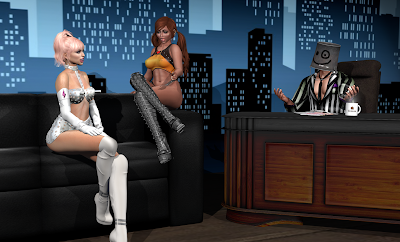 Bucket: Hello Freaks and Geeks, if you're just joining us now, welcome to the Bucket and Peanut Show Presents: Bucket & Peanuts Super Spooky Fright Night Totally Scary Halloween Spectacular. I'm your host Count Buckula, and as always beside me is my electric co-host, The Bride of Frankennut!

Peanut pokes out her tongue

Bucket: Our guest tonight, a sexy Swiss Army Knife of a woman, and I'm not just saying that because SHE'S A FREAKING CYBORG!

Bucket: Yes it feels like this woman can do about anything she sets her mind too... She's a widely renowned photographer, model, event organizer, she runs a thriving social hub on Discord where people can go see her live picture edits watch her streaming games, and she's a DJ who always plays to a packed crowd.  I could keep going but you all get the point. Everyone please put your hands together for Sparklebottom Lasertits!!!

Bucket: Welcome welcome to the show Sparkles, happy we finally managed to get you here after that address mix up fiasco

Peanut: Hey don't look at me, that robo-bitch on the GPS had an annoying accent, she had to go!

Bucket: Yes but still screaming out "Die Skynet! Die!!" as you threw my phone out the window was a little dramatic don't you think?

Bucket: Ok Sparkles, as mentioned earlier, you have had your fingers in a lot pies over the years 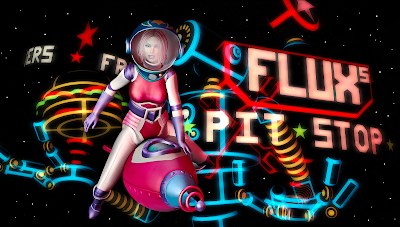 Bucket: But where did it all begin for Sparklebottom? It seems you a mostly known for your photography and DJing, I'm guessing it all started with a benevolent and irresistible urge to provide the second world with phat beats and pretty pictures?

Peanut raises and eyebrow and looks at Sparks

Peanut: What?! The rise of the machines is comin!

Sparklebottom Lasertits: Photo are actually the reason why I came to Second Life in the first place, though I never thought I'd be taking them myself. But someone had shown me their Flickr and I was amazed by how much Second Life had improved over the years. I actually joined once way back in 2005 when clothes were painted on and everyone had triangle feet. So when I rejoined again almost four years ago, I found myself drawn to how pretty everyone was. I was addicted to how sexy Flickr was and was just fascinated by the idea that I could create my own erotica with it. So I tried my hand at it, and well...here I am, five thousand followers later.

Bucket: Wow, you actually came here for the art? Gotta admit that's a first for me to hear that from someone

Sparklebottom Lasertits: If you want to call butts art (and I do!), then yes!

Peannut: That's actually the reason why I came......for the butts!

Sparklebottom Lasertits: Who doesn't love butts? *glares at the audience* See? No one is complaining!

Bucket: Came for the butts, stayed for the photos, I dig it

Peanut: and the donkey shows! 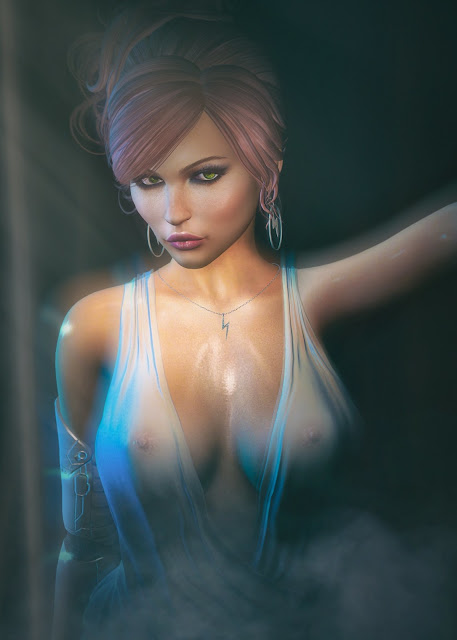 Bucket: Now in the past couple years you've really taken a step back with your DJing, only performing a handful of shows each year. Yet you still draw in and play to a packed venue every time. Seriously the last time I tried to attend one I literally could not make it past security because the place was so full. What's your secret, how do you stay so relevant? In the spirit of the season I'm going to go ahead and assume that some deal with the devil was made?

Peanut: Can't be, the Devil's my publicist and he promised me I was his only client and three wishes for one soul!!

Sparklebottom Lasertits: I think Peanut has Satan mixed up with the Genie from Aladdin.

Bucket: I knew it, Robin Williams was the devil!!

Sparklebottom Lasertits: Bucket, I really don't know how to answer that question because I sometimes ask myself that. A lot of music I play is obscure and certainly not what is beloved by the masses here in Second Life. But what I put into my sets is a whole lot of LOVE for the music I play. I get very focused when I create my sets and I think/hope that resonates with the crowd. And I think the fact that I am very social (and usually drunk!) during my sets helps! It's not just a bunch of people standing in silence while the DJ quietly does their thing. I don't see the point of partying in silence. I am just glad others agree with me.

Bucket: So basically your secret is.... Being yourself?

Sparklebottom Lasertits: I think so. I am already pretty extra, so when I get up in front of a crowd, I guess you could say I'm extra extra!

Peanut: You should have your own gum brand!!!

Bucket: Or your own designer line of buckets

Sparklebottom Lasertits: You know, with photography and DJing under my belt, I figure it's just a matter of time before I start meshing.

Bucket: The sky's the limit 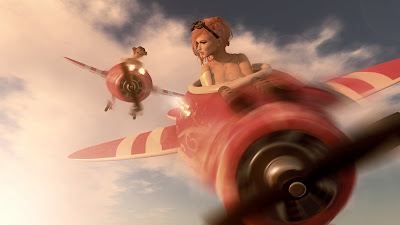 Bucket: Anyway...So... Sparkles, as we've mentioned already it's that spooky time of year, a wild time of year, a mischievous time of year. So between you and me, what's the most messed up shit you've gotten into for a Halloween.... swear to god I won't tell anyone, Peanut put your fingers in your ears

Peanut flips Bucket the bird: "Nah....I know where these fingers have been!"

Sparklebottom Lasertits: *glares at the audience* Just between you and me and no one else?

Bucket: Hand on my heart, swear to Satan... between you and me

Peanut: I won't tell a soul but will probs write it on a bathroom wall!

Bucket: Don't listen to her... now please do tell us your secrets!

Sparklebottom Lasertits: My most craziest, wackiest, looniest, insanest Halloween? Hmm...for legal reasons, I can't go into too many details, but I can say that there was a LOT of pumpkin spice cocaine, a couple of gallons of baby oil, several rolls of saran wrap, 40 girls, and a chalupa......Oh, and a duck. But that's really all I can say without breaching the settlement clause.

Sparklebottom Lasertits: I thought you'd be more excited about the chalupa.

Bucket: You completely lost after Pumpkin Spice Cocaine.... *sighs*   I miss the 80's

Peanut: Luvs me a chalupa......but ma noozel is feeling festive! 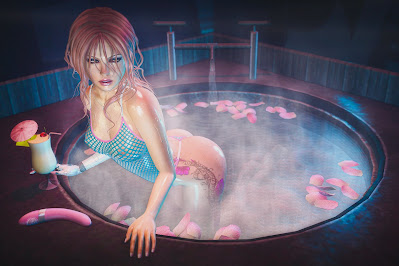 Peanut: Cloaks, masks and orgies?......Sounds like the last Super Hero Party I went to!

Sparklebottom Lasertits: That's right, Bucket! On Friday, October 30th at 9pm SLT, I'll be making my DEBUT at Elysion during their massive two-day Halloween festival.  I'm closing out the first night of the festival. I'm really excited about playing Elysion for the first time, especially during such a high-profile event. And, Syn (owner/builder of Elysion) just announced a few hours ago that this year's Halloween sim is themed after The Goonies! It's apparently going to feature many of the places featured in the film. I'm super excited to be a part of it and that theme may very well influence my Halloween costume this year!

Peanut: SLICK SHOES FOR EVERYONE!!!!

Bucket: The Goonies is only the best movie of all time

Sparklebottom Lasertits: So much truffle shuffling! I may have to find a Superman shirt and lower one of my ears.

Bucket: I love the start when a 12 year old Corey Feldman is freaking out the Mexican maid by talking about cocaine and sex swings

Peanut: He was soooooo cute and evil!

Sparklebottom Lasertits: I expect there to be cocaine and sex swings there during the festival.

Peanut: Pumpkin Spice and Taco lover!......can we keep her, Bucket!

Bucket: Yes Peanut, get the pokeball and catch her now

Bucket: There better be someone there dressed as a Penis in a pirate outfit... you know... because as if One Eye'd Willy wasn't a total dick reference

Bucket: You know it!

Bucket: Alrighty we've reached that part of the evening for Peanuts Peanut Butter Rapid Fire Question Time! Good luck Sparkles, I shall pray for your soul. Take it away Peanuto!!!

1. If you were in the middle of a zombie apocalypse and were surrounded by Brain Eaters, who from your friends list would you sacrifice for the survival of the rest of yo group?

2. What's a pro and a con of bumping uglies with The Wolf-Man?

3. Your camping with Jason Vorhees, who from your Friends List would you invite along for S'mores and did ya pick that friend because you think you can run faster?

4. If you were part of Coven of Witches and could make a potion to make somebody do aaannnnnyy thing you want, what would ya whip up?

And finally one last friend's list question cause I Loooovves putting our guests on the spot!.......If you were stranded in middle of no where and had to resort to cannibalism, who do you think would be the tastiest and why? 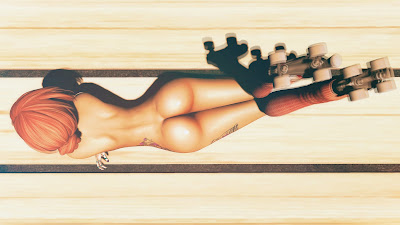 Sparklebottom Lasertits: 1. Since zombies eat brains, you think they'd be more likely to go after whoever's got the biggest brains, right? So it would have to be someone smarter than me. Which means, hmm...yeah, pretty much anyone on my list would be good for that. KT Syakumi is one of the smartest people I know, so I'd sacrifice her. It's be a shame though; she's so pretty!

Peanut: I was thinking hair balls, but I getcha!

Bucket: Get out of my head

Sparklebottom Lasertits: 3. Hmm, who would I want to sacrifice who ALSO loves S'mores? That's a tough one! I don't really discuss my friends' love of S'mores as that is a personal matter, but if I had to guess, I think my roommate, Alicia West is probably a S'mores lover. She's got that look in her eye, you know? So yeah, probably her.

Peanut: and it would distract her from the guy with the machete wearing hockey mask walking creepily up behind her! Good plan!......The Old S'mores distraction!

Sparklebottom Lasertits: 4. This is a tougher question that it seems because I don't know what it's like to not get what I want! I mean, I guess if I could have ANYTHING, I'd conjure up ONE MILLION DOLLARS. And maybe some friggin' laser sharks. Muahahahaha!

Bucket: Oh you'll love them, they're so cute!

Sparklebottom Lasertits: 5. That's easy: I'd take you, Peanut. This is the part where I come up with some clever euphemism about butter and spreading you and blah blah blah, you get where I am going with this. Something about oral sex, obviously. Because, you know, peanut butter tastes good. Is this making any sense? I feel like this isn't very sexy now. I'm sorry. What was the question?

Bucket: Don't look at me, my mind blank after you said "Oral Sex"

Bucket: Who doesn't love a bit of Satay :D

Peanut falls off the couch 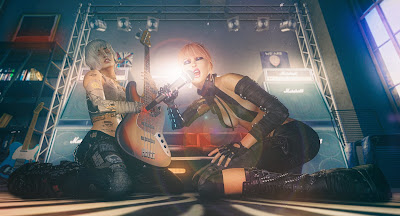 Bucket: Ok well before this starts going places we can't keep filming I'm gonna have to say.... that's all we have time for right now, Stay tuned wonderful viewers for more after the break

Bucket: Thanks for coming on the show Sparkles, it was a treat to have you and good luck with your show :D

Sparklebottom Lasertits: Thank you both so much for having me! I'm so excited my nipples grew two inches!