After meeting (and fucking) the man of the house, Isa lays down for a nap and dreams...but as the song goes - "Did I have a dream, or did the dream have me?"

Watch Episode Two here or down below:

Posted by Isabelle Cheviot at 4:49 AM No comments:

The Manor - Episode One

Click here to watch, or watch it below.  Hope you're all hanging in there and doing well!

Posted by Isabelle Cheviot at 4:48 PM No comments: 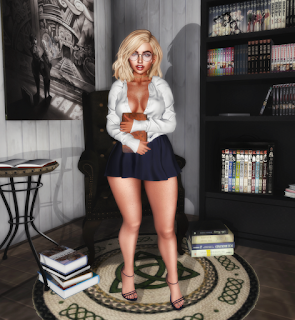 Isabella: Hello friends. I am Isabella Luvscock and today it is my utmost pleasure to be here today to introduce a new segment for the show. A tale filled with intrigue and betrayal, of the exploration of an exotic locale where you never know what will be hiding around each corner... or up in the trees for that matter......

Join our fearless yet dimwitted trailblazers as they are guided through  mysterious lands by those brave enough to lead the way.

My friends, it is my duty and my pleasure to welcome you to The Misadventures of Bucket and Peanut Chapter One - Simmieville.

The Helicopter's Main Rotor Blades came to a halt and Bucket, with beer in hand and his fun-sized co-host, Peanut, stepped out of the chopper.

The view from the landing pad outside the Mayor of Simmieville's house was very impressive. A sprawling landscape filled with an adorable little amusement park, the cutest boutiques, a bakery that emitted a wonderful smell of freshly baked pastries and so much more just waiting to be explored.

Bucket and Peanut made their way to the walkway that led down the hill to the quaint little amusement park.

"Kodak moment!", explained Bucket. "Here... hold my beer", he said and handed the half empty bottle to Peanut.

"I don't know how you were drinking on the flight", Peanut asked as she smacked the mosquito that landed on the back of her neck.

"I skipped breakfast!" Bucket replied. He pulled a small digital camera out of his pocket and handed it to their producer, Slimy Steve.

Peanut handed the beer back to Bucket and two struck a pose for Steve.

Bucket took one to many steps back and fell backwards, Bucket over heels tumbling down the hill. Finally coming to rest just outside the little amusement park. 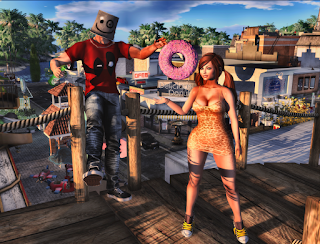 He shook his bucket and wiped his eyes, only to find he had landed at the feet of a beautiful woman. Bucket stared at her Jimmy Choos and slowly looked up her long smooth flawless legs. The gorgeous brunette smiled down at him with her honey sweet lips.

"G'Day!", she said with sugary voice

Bucket hopped to his feet and dusted himself off. "Bucket Paleman!", he said as he extended his hand.

"Simone Landy, Head Architect and Creator of Simmieville.......and apparently Mayor CC has asked me to be your guide."

Peanut finally reached the bottom of the walk way and joined Bucket and their guide. It was apparent she had been delayed by an extreme giggle fit she had while watching Bucket's "fall from grace".

Peanut laughed ,"He sure knows how to make a dramatic entrance!"

Simone immediately went into her pitch about the creation of Simmieville. She explained how Mayor CC was a dear friend of her's and after he bought a substantial parcel of land, he commissioned Simone to design and over see the build what is now known today as Simmieville.

She started the tour off at the amusement park called Ashy Land that was situated in the east corner of the city, next to the beach and just below the hill that led up to Mayor CC's estate.

"I wanted to have a place were everyone could unwind, ya know. Like after a long week, the residents of Simmieville really enjoy blowing it off in Ashy Landy!"

Bucket looked around at all the rides that Simone was able to fit into such a small space. "Quite impressive Simone! But is there anything for the adults to enjoy. I mean most of the rides are geared towards the kiddos."

Simone led them over to a ride tucked in the corner of the park. "I give you The Pocket Rocket!" Peanut immediately busted out laughing, "It's a mechanical cocksicle!"

Simone learned over and whispered to Bucket, "actually it's a shlong!"

Peanut climbed up and straddled The Pocket Rocket's shaft. "Well I never met a cocksicle that I couldn't tame!"

"What does she have a suction cup between her legs?", asked Simone. "Well....more less", Bucket replied. 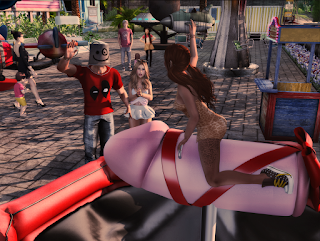 Once Peanut had got her fill of The Pocket Rocket, their guide led them to a beautiful water fall in the woods on the west side of the city. Simone was extremely proud of The Australian Wildlife that called Simmieville home.

"We have I'll kinds of Wildlife here in Simmieville. Some cute and cuddly, some extremely deadly and some are a little mixture of both...... for example a Koala. Very cute but will drop out of a tree and close your face up when you let expect it. "

"Have you ever seen a Trouser Snake?", asked Bucket in an over-the-top sleazy voice.

Bucket took off running, "WHAT THE F#CK IS WRONG WITH YOU!", he screamed as he bolted out of the woods. Peanut ran around briefly in a circle before running in the wrong direction. "WHAT THE F# CK IS A DROP BEAR!", she screamed

Simone couldn't stop laughing as she slowly walked after Bucket. "God that never gets old!" 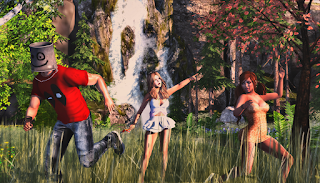 With the sun going down on Simmieville, Simone took our two weary travelers to one of Simmieville's hottest night spots, Sapphire's.

After one two many rounds, Simone decided it was time for the next stop on the tour. She ordered around of "Road Sodas" for the walk across town. "You can drink on the streets in Simmieville?" , Bucket asked as they exited the bar, beers in hand. "I's can do ANYTHING I want!.....I's mades this town!", exclaimed a very tipsy Simone.

Bucket walked next to Simone with a very drunk Peanut being up the rear. Simone's heels clicked on the asphalt as the three crossed Main St. In the direction of there last stop, Simmie's Goodies, the diner famous for their mouthwatering biccies.

"OK!.....OK!.....Now remember that in Simmieville the cabbies are jus as unpredictable as the wildlife so.....LOOK DROP BEAR!"

Bucket laughed, "You not fooling us again". Simone snickered as the two of them hurried to cross the street. Peanut stopped and stared up at the sky. "I is so totally gonna see a drop bear if it the last thing I......"

A taxi cab blasting "Gloria" hurtled down the street, taking Peanut out mid-sentence. The pint-sized trouble maker bounced off the hood of the cab, her left sneaker landing in the lap of a homeless guy passed out on on a bus stop bench.

Simone slightly stumbled over the curb, spilling her beer after safely crossing the street with Bucket. He grabbed her by the wrist to keep her from falling "Party foul!.....HAHA......I got ya!", he laughed while Peanut laid in the road moaning like a wounded chipmunk. 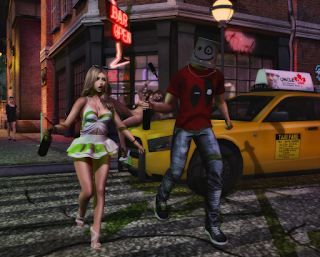 Several hours and a trip to Simmieville General's Emergency Room later, Simone took a seat across from Peanut. She had just finished signing Peanut's cast, dotting the "i" in her name with a heart. "Now I wish I would of added an IHOP to the city,  you would of fit in perfectly!", Simone joked.

Peanut shook her head, but couldn't help letting out a cute lil giggle.

Bucket returned to take with their order. "Yeah Peanut!......sorry we didn't realize you got run over. If it wasn't for that guy playing the saxaBONE across the street, we might of heard you moaning. I mean it was kinda HUMERUS the way the guy with the tromBONE started a little battle with the guy though. I was laughing so hard I think I hurt my own funny BONE!......Now should I sit next to you or Simone, you do look a little Bonely all by yourself."

Bucket thought about it for a second and then shook is head. "I believe I am."

"Good", said Peanut while giving her partner in crime the finger. 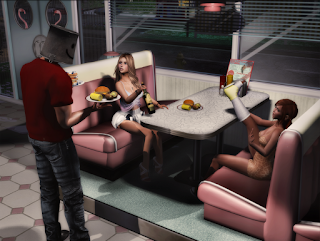 Isabella:*Closes the book*  Well now boys and girl, wasn't that quite the tale? Our heroes having bravely faced the perils of mad mechanical cocks, cuddly fuzzballs of death, and late night public health care, they now feel they are ready for anything the next adventure can throw at them.

Where will this next adventure be?  Well... who can say? They will go wherever the winds of chaos blow them.... maybe even to a sim near you!

Posted by Cykes Silver at 4:28 PM No comments: